The 2008 ACM South Pacific Programming Contest Results have been confirmed: my team’s come 3rd overall (as expected). We find out whether or not we’ve achieved a wild card position in the World Finals in December. 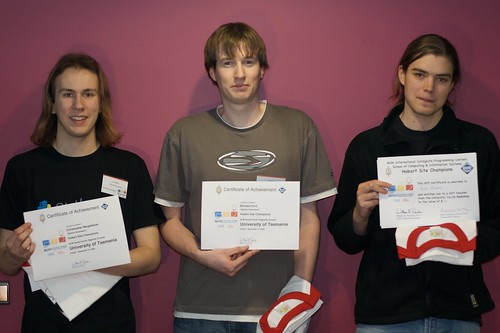 For the benefit of those who were intersted, Mehffort is a portmanteau of meh and effort, and is a very popular word in the semester 2, 2008 Maclab dialect of English. It is used to convey one’s lack of motivation towards a particular task. In context:

As proud denizens of the Maclab, my ACM ICPC team for this year decided to adopt the word as part of our team name.

The ACM ICPC South Pacific Region was on yesterday, and was great fun (as usual). My team this year, the Mehffort Musketeers consisted of Alex Berry (who’ll be competing in the Google Code Jam regionals soon as well), Michael Ford and myself.

For the benefit of people who did the ICPC this year: I solved problem A, C and I; Michael solved B and D, and Alex solved E, F and H. Here’s some general commentary on the problems that I solved:

As alluded to earlier, we solved 8 problems, and we’re currently the only team to do so with the testing data used on the day (this means that we’re in a provisional first place), however, there are many teams who are likely to get problem C rejudged, and following that we’ll likely be third. More news to come.

I found this very useful news service today, at HasTheLHCDestroyedTheEarth.com. May you find it informative.

So the new version of Debian is to be known as Squeeze, eh?

Does anyone else think of a certain 1970’s British New Wave group?